The other day my sister and I had an entertaining (at least from my end) discussion about the two baby Copperhead snakes that she found while cleaning out her flower gardens last weekend. From her end I think it was a harrowing experience (and rightly so) but the image of her running across the yard with a baby Copperhead stuck between the blades of her pruning shears struck me as hilarious. Apparently it crawled out of its hole a few inches from her hand as she was pruning the lower branches of her shrubs. She didn’t know what to do and just reacted, reaching out and trying to cut its head off with her shears. Unfortunately the shears didn’t cut all the way through (time to sharpen your shears, Kiki!) and she went running around the yard with the snake dangling from the shears, shrieking and trying to figure out what to do. She finally dropped it into a bucket and chopped its head off with a yard-edging implement. By the time her husband finally reacted to her screams (he hates snakes as much as my husband hates spiders), she had already handled matters on her own (You go girl!). When she encountered the second (much smaller) snake she was better prepared and dispatched it immediately. Upon encountering the first snake she didn’t even know if it was poisonous; she just hates snakes, me too, and wanted to kill it.
Our father, a biologist/ecologist, who always tried to teach us that snakes are beneficial (they eat rodents and insects), to treat them with respect, and how to identify the dangerous ones, would be rolling in his grave right now if he knew.

After it was dead she took the time to properly identify the snake and felt justified in killing it. It took me a while to get the image of her running around her yard in circles with a tiny snake caught in her pruning shears but I finally dragged myself off the floor where I’d been rolling in laughter. And that’s when she and I realized the seriousness of the situation. Since the snakes were babies, there are bound to be more of them. What if next time she’s not so lucky and gets bitten. Are baby Copperhead’s more dangerous than adult Copperheads?  See reptilechannel.com for answers to this and other snake myths. 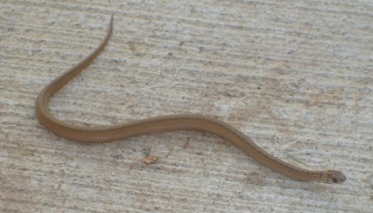 How do you avoid venomous snakes?  What should you do if one bites you? These are the questions I am seeking to answer today.

I learned that there are four different species of poisonous snakes in North America. These species are Rattlesnake, Cottonmouth Moccasin, Copperhead and Coral Snake.

I also learned that since venom is injected, and poison is ingested, technically snakes are not “poisonous” or “non-poisonous”. They are “venomous” and “non-venomous”. See Trailquest.net for a wonderful list with photos and descriptions of venomous snakes. It is important to know which (if any) of these snakes bit you in order for the ER to administer the correct anti-venom. The right anti-venom can save a person’s life. Getting to an emergency room as quickly as possible is very important. If properly treated, most venomous snakebites will not have serious effects.

If at all possible keep the dead snake to show to medical personnel, take a picture of the snake, or at least note its general shape and appearance.

While waiting for medical help:

Medline Plus gives you a list of venomous snakes in North America and some specific symptom’s of bites from each one. Don’t let this article scare you; they seem to be a little “over-reactive?”

Vote for us at Top Mommy Blogs!

There Will be Pancakes

There Will be Pancakes